The word comes from the Greek for “god”- theo and the application of an a to mean “without”. Therefore an atheist is someone without God, or more correctly without a belief in God. It could be put more strongly as someone who argues for the non-existence of God.

It is interesting that in the UK atheism is acceptable. In a country where 35% of people express a belief in God (see The Financial Times/ Harris Poll of 2006 at http://www.harrisinteractive.com/news/allnewsbydate.asp?NewsID=1131 ) it is not unusual for someone with a strong religious belief to be in the minority. However, in other countries a belief in God is much more ingrained. The same Harris poll as mentioned above has the USA polling 73% of people believing God. It is therefore unsurprising to see the most vocal voice of atheism is an Englishman- Professor Richard Dawkins of Oxford University. In his book The God Delusion he argues that “The status of atheists in America today is on a par with that of homosexuals fifty years ago” (2006: 4). He calls for atheists to come out. This seems to be supported by Walter Sinnott- Armstrong when writing about his atheism: “Why would anyone argue against the existence of God? If you feel sure that God does not exist, why come out of the closet and announce your reasons publicly? You are bound to make enemies. You won’t convince anybody. Why bother? Many friends have asked me these questions” (2004:81).

The results of the Harris poll may be slightly misleading- you will note that it cites the number of people who consider themselves to believe in God, it does not question the number of atheists within the remaining 65%. It also does not seem to tally with the results of the 2001 Census, the Harris data is turned upside down- with people with no religion being a maximum of 23.2%: 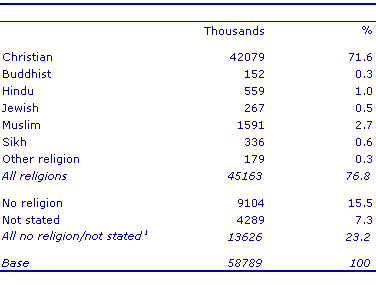