Joseph Smith’s First Vision was not the end of his role as a prophet. Latter-day

Saints believe that his next major role was in the translation of another book of scripture to go along with the Bible- the Book of Mormon, Another Testament of Jesus Christ.

Following the First Vision persecution continued as Joseph refused to deny that he had seen God. On 21 September 1823 after going to bed, Joseph prayed. The angel Moroni appeared to him. 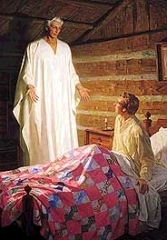 “While I was praying, I discovered a light appearing in my room, which continued to increase until the room was lighter than at noonday, when immediately a personage appeared at my bedside, standing in the air, for his feet did not touch the floor… When I first looked upon him, I was afraid; but the fear soon left me.

He called me by name, and said unto me that he was a messenger sent from the presence of God to me, and that his name was Moroni.”

Joseph was told there was a book buried written on golden plates (sheets of gold). 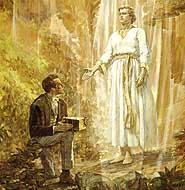 On these plates was the history of the ancient peoples of the American continent and of the visit of Jesus Christ to them. Moroni, himself had buried the book 1400 years earlier.

“He told me, that when I got those plates of which he had spoken should not show them to any person… While he was talking with me about the plates, the vision was opened to my mind that I could see the place where the plates were hidden.

After this, I saw the light in the room begin to gather immediately around the person of him who had been speaking to me, and it continued to do so until the room was again left dark. He went up into heaven. He again visited me twice that evening… Repeating the same instructions each time.

Almost immediately after the angel had disappeared me for the third time, the cock crowed, and I found that day was approaching.

I shortly after arose from my bed, and, as usual, went about my work; but, in attempting to work as at other times, I found myself so exhausted. My father, who was working with me, told me to go home. I started going to the house; but fell unconscious on the ground.

The first thing that I can remember was a voice speaking unto me, calling me by name. I looked up, and saw Moroni standing over my head, surrounded by light as before. He then told me all that he had told me the previous night, and commanded me to go to my father and tell him of the vision and commandments which I had received.

I returned to my father in the field and told him everything. He replied to me that it was of God, and told me to go and do as commanded by the messenger. I left the field, and went to the place where the messenger had told me the plates were deposited.

Near the village of Manchester, Ontario county, New York, stands a large hill

The Hill Cumorah is about three miles southeast of the Smith farm in Palmyra, New York.  Photograph: August 1907

On the west side of this hill, not far from the top, under a large stone, lay the plates, in a stone box. I lifted the stone with a lever and looked in and saw the plates.

On the twenty-second day of September, one thousand eight hundred and twenty-seven Moroni gave the plates to me with this charge: that I should be responsible for them; that if I should let them go carelessly I should be cut off; but that if I would use all my efforts to keep them safe, until he, the messenger, should call for them, they should be protected.

As soon as people knew I had them every way that could be thought of was tried to get them from me. But by the wisdom of God, they remained safe in my hands, until I had accomplished by them what was required at my hand. When, according to arrangements Moroni called for them, I gave them to him them up to him; and he has them in his charge until this day…

On the 5th day of April, 1829, Oliver Cowdery came to my house, until which time I had never seen him. He stated to me that having been teaching school in the neighborhood where my father lived, and while there the family told him the circumstances of my having received the plates. He had come to make inquiries of me. Two days after the arrival of Mr. Cowdery (being the 7th of April) I started to translate the Book of Mormon by the gift and power of God, and he began to write for me.

The Book of Mormon, first printed in March 1830, is currently being published in more than 80 languages worldwide.

Joseph Smith and the Book of Mormon Tasksheet

All images taken from www.lds.org